Back to the top
×

Zimbabwe is home to a great number of unique dance drumming styles located in isolated rural communities which are under threat as young people migrate to the cities to look for work. These drum rhythms are an integral part of the Zimbabwean cultural identity and there are currently no musicians capable of capturing these skills and techniques which could provide the basis for a whole new range of music styles if a group of musicians/teachers were trained to document them properly and find new uses for them in a changing cultural context.

Zimbabwe is also home to some of the most interesting guitar styles incorporating playing techniques, both rhythmic and melodic, from traditional instruments like the mBira (Lamellophone). As many of the best guitarists have already died there is a need to document these playing techniques systematically, including the underlying technical principles used to create the different styles, to enable them to be passed on to future generations.

In 2016 the Global Music e.V. applied for a grant to conduct research and documentation in Zimbabwe from the Kulturerhalt (Culture Preservation) program of the German Foreign Ministry in co-operation with the Music Crossroads Trust Zimbabwe and the National Arts Council of Zimbabwe.

The aim of the grant proposal was to train the teachers at the Academy to document their own cultural heritage on video using modern recording technology and show them how to develop teaching videos and teaching materials which capture the essential elements of the music in order to empower them to develop relevant new curriculum for their teaching program at the Academy.

This project represents the second stage of the development of the Academy, having learnt to read, write and transcribe African music, the task of documenting their rich musical culture was the next step to take.

The documentation team documented 7 drum rhythms from 3 different villages in the Chiweshe communal lands 140km north of Harare. A total of 7 villages were visited and the 3 were chosen because they represented the 3 different contexts in which the drumming is currently being used.

The Guzha Village is located 33km north of the Nzvimbo Growth Point on the Chiweshe road to Chaona. The village, which lies beneath the Chiburi mountain, is home to a sacred Shona shrine which is dedicated to Dzivaguru – one of the great Mhondoro Yenyika or Makombwe spirits. The shrine is a good example of the drumming in a form close to its original ancestral use in the contect of the Shona belief system.

If you travel 16km north from the Nzvimbo Growth Point on the Chiweshe road towards Chaona you will reach the turn-off to Nyakudya Shopping Centre which lies 4,7km to the East on a dirt road. The village is situated close to the Nyakudya shopping centre and is the home of the Dzomutizo Cultural Group. Nyakuzdya Village provides a typical example of how the drumming is used in normal village life in the area.

Gweshe Village is located 18km south of the Nzvimbo Growth Point just off the southbound Chiweshe road to Glendale and is the home of the Nhare dze Chiweshe Cultural Group. Gweshe Village and the group which performs there provides an example of the drumming being used in the more modern context of income generation.

In addition the team documented two of the three main guitar styles in Zimbabwe. The Mbira and Sungura guitar styles. The leading exponents of the two styles were invited to the Music Crossroads Academy to record their particular contribution to the development of the style in question. In the case of the Mbira guitar style all the main exponents apart from Moses Nyaruka are already dead.

In the second part of the project the team produced two educational Booklets with accompanying DVDs containing the transcriptions of the documented music, the video recordings made as well as the interviews made with the musicians. These were printed and distributed in Zimbabwe to educational institutions, libraries, researchers and musicians.

In addition a set of drums was acquired by the Music Crossroads Academy and the drums styles are now being taught in the percussion program there. The transcriptions of the guitar styles are also being used in the academy program to give the students a deeper understanding of their guitar traditions. 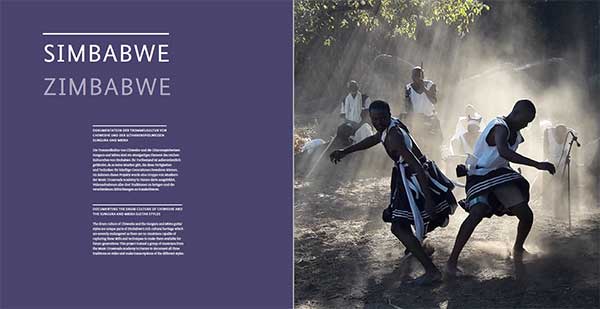 “Documenting the Drum Culture of Chiweshe and the Mbira/Sungura Guitar Styles in Zimbabwe”, chapter in the photo book “Kulturwelten”, produced by the German Federal Foreign Office

This project is supported by:

This website uses cookies to improve your experience while you navigate through the website. Out of these, the cookies that are categorized as necessary are stored on your browser as they are essential for the working of basic functionalities of the website. We also use third-party cookies that help us analyze and understand how you use this website. These cookies will be stored in your browser only with your consent. You also have the option to opt-out of these cookies. But opting out of some of these cookies may affect your browsing experience.
Necessary Always Enabled
Necessary cookies are absolutely essential for the website to function properly. This category only includes cookies that ensures basic functionalities and security features of the website. These cookies do not store any personal information.
Non-necessary
Any cookies that may not be particularly necessary for the website to function and is used specifically to collect user personal data via analytics, ads, other embedded contents are termed as non-necessary cookies. It is mandatory to procure user consent prior to running these cookies on your website.
SAVE & ACCEPT